In the current design of the Waku-RLN-Relay protocol, the membership Merkle tree (MT) is locally persisted by all peers being relayer or message publisher. Message publishers require the MT to be able to generate valid proofs with respect to the latest state of the membership group whereas the relayers need the knowledge of MT to be able to verify the rate-limit proofs of the Waku messages. This incurs some storage overhead which may or may not fit resource-limited devices. This overhead also depends on the algorithm used to represent the Merkle tree. So far, we are aware of two algorithms namely, Full Merkle tree (FMT) and Hash-Map Merkle tree (HMMT), and in this post, we would like

Per-app memory cap: Before starting the analysis, it is worth reviewing the per-app memory cap on mobile devices (Android and iOS) which are more resource-restricted compared to desktop nodes. Note that these values are not accurate and not evaluated by us, and merely to give some intuition on per-app memory limitations:

Assuming that the MT is going to be loaded in memory, then we are facing the most constraining values of 32MB on Android devices and 600MB on iOS devices.

The FMT algorithm uses an array with 2*(2^d)-1 entries to represent a Merkle tree with depth d. Each entry represents a Merkle tree node of size 32 bytes (corresponding to the256 bits hash value). The entire array is allocated upfront. The storage complexity of FMT is exponential in the depth of the tree i.e., O(2^d).

Group size = Tree capacity The following diagram depicts the storage overhead in Megabytes for different tree depths i.e., d=[1..20]. As expected, the overhead increases exponentially with d. In the worst-case scenario, a tree of depth 20 requires 67.10 MB of storage.

Group size < Tree capacity: In FMT, the group size does not affect the storage overhead because the required space for the full tree is allocated at the beginning; further updates on the tree only alter the existing values. For example, at d=20, the storage overhead is 67 MB even if the current group size is 1000.
Therefore, in the FMT algorithm, it is best to set the tree depth close to the expected group size to save storage space.

In this algorithm, each Merkle tree node is indexed by two values each of size 8 bytes on a 64-bit machine (4 bytes on a 32-bit machine). As such, each tree node takes up 2*8 +32 = 48 bytes corresponding to the size of indices and the hash output.

Group size < Tree capacity
In the HMMT algorithm, a hash-map is used to instantiate a Merkle tree. Nodes are added to this map gradually as new leaves are added to the tree. Each MT node encapsulates a 32-byte hash value and index of size 16 bytes.
Unlike FMT, since space allocation is done incrementally, the storage overhead is a function of the group size and is less affected by the tree depth. Below, we demonstrate this fact for a tree with a depth of 20. Under this depth, for a group size of 1000, the storage overhead is 0.097 MB which is almost 1000 times less than the storage overhead of a full tree with depth 20 i.e., 100 MB. 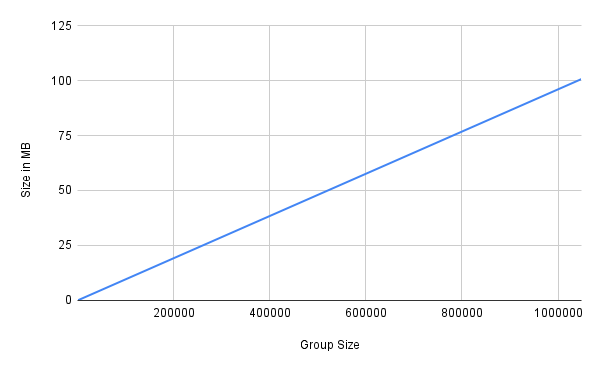 But what is the impact of the tree depth on the storage overhead? if we set the tree depth so high at the beginning but later realize the group size is much less than that, how much storage space do we lose? Does it matter to set the Merkle tree depth close to the expected group size? The short answer is no, unlike FMT, it does not make a significant difference. The following simulation results will explain why.
Below, we demonstrate the storage requirement to persist a group of size1000 under different Merkle tree depths: d=[10..20].

As the results show, the storage overhead increases by an additive factor of 80 bytes for every extra depth. Take d=10 and d=11 as an example, the difference in their storage overhead is 96480 - 96400 = 80 bytes. This trend holds for any other group size. Thus, if the Merkle tree depth is set to d=20, and we end up having a group size of only 1024 members i.e., 2^10 members, then the extra storage overhead is (20-10) *80 = 0.8 KB bytes which can be considered minimal and insignificant.
Note that this analysis is only valid for the storage overhead, however, setting a higher value for the depth may have a different impact on the computational load. This needs to be evaluated separately.

Comparing the max storage overhead of FMT and HMMT, as depicted in the figure below, brings us to the conclusion that FMT is more efficient than HMMT. However, this is only true for the worst-case scenario where the group is full to the maximum tree capacity.

But, this worst-case scenario does not always hold, instead, in most states of the system, the group size is much less than the tree capacity. In the following figure, we take a snapshot of the system at group size 1000. In this snapshot, we compare the storage overhead incurred by FMT and HMMT for d=[10..20].

As you can see, in this more realistic scenario, HMMT shows better performance than FMT. For example, for d=20, persisting a group of 1000 members using HMMT requires 0.097 MB whereas it requires 67.1 MB when using FMT, which is 700 times more than HMMT.

It brings us to another conclusion that HMMT outperforms FMT when group size is less than the tree capacity. However, the exact point at which this relationship changed needs more investigation.

However, the MT storage overhead may not be reasonable for mobile devices especially if we plan to load the MT in memory in which case we will/may face the per-app memory cap of 32 MB on Android phones.

In light of the approximate per-app memory cap provided in this post and according to our experimentation result, the in-memory storage of the membership Merkle tree for a large group of size 1,000,000 members is feasible for almost all known devices. Nevertheless, for scalable production usage and as future work, we would still like to look into some disk-based tweaks for Merkle tree storage management.